Each question is divided by a line.

Server(s) you would like to moderate:
Prison, Survival & KitPvP

How active can you be per week?
The only scheduled thing I have at the moment is evening school twice a week. This usually takes place on Tuesdays and Thursdays. Other than that I have an open schedule and can spend most of my time moderating said servers.
My schedule is the following:

Disclaimer: This times might vary in both positive and negative ways when I cook or play other games. I’m sure though that I can spend a decent amount of time on the server and have a positive impact.

Do you have any past moderating experience? If so, briefly describe it:
Probably one of my weakest points because I don’t have to show much in that department. I used to be a moderator on a server which a friend of mine owned. The server was called funcraft.mc and was a Freebuild & PVP themed server which averaged about 50 players. Other than that I don’t have much more moderating experience.

What is your knowledge of MunchyMC?
As far as I know (which is probably not much LOL) MunchyMC originated from the broken pieces that MCPvP left in the heart of most of the “OG” players. That’s where Munchy was created to offer those players a new “home” to have fun and have a good time overall.

Munchy offers a great variety of game modes including:

KitPvP: A server where people can fight each other using custom kits to farm up on tokens and killstreaks to show off to their friends. There is also a variety of events that can be hosted by players or staff members including things like King of the hill (Koth), One in the chamber (OITC), Sumo and many more. Probably the most popular sub server in the network with the highest consistent player counts.

Prison: My favorite because it offers a good twist on the usually boring grinding work which is involved in prison type servers. It offers a huge variety of ULTRAS and LEGENDARIES which increase the gameplay value by a lot. Other than that you can either spend your time mining for money or loot outside to find rare items and kill other players.

Survival: The newest addition to the Munchy Network. It offers a spin to classical SMP with the use of a few but good selected Plugins which don’t alter the classic survival experience too much. The economy is based on gold, you can auction items via /AUC and set custom homes to shorten your travel time.

Wool Wars: A minigame type mode where the main goal is to be the last man standing. You stack up using wool because the floor turns into a death zone which slowly creeps up to the top. On your way up you get to loot chests and contest your towers against the other players to be hopefully the last player to be alive.

Smash: Never played this game mode but I still try to give a short description. I’m pretty sure it’s based on Super Smash Bros which was also existent on the old MCPvP server network. You can use different items or your fist to stack up the enemy’s percentage which makes them fly further and further. The goal is to throw your enemies off the map to lose lives. When your lives reach 0 your out. Last man standing usually played with 4-6 players.

Purgatory: A super small server which is mainly used by players who received the ban hammer. There these players can farm their way up to get a free unban. Some of the tasks include mining stone, shoveling dirt or getting to a high LVL. Players who are not banned can troll these players and make their time spend to absolute hell … which is what those kinds of players deserve

Others: There are also some other game modes which can be hosted by staff. Those might be things like old school Hardcore Games or Maze Runner. These game modes are hosted spontaneous and require players to type a command in chat to join.

Do you have any Anticheat experience?

Corresponding to my missing experience as a moderator I only have little experience when it comes to using anti-cheats. I’m pretty sure that I’ll be quick to pick up the necessary skills to use that “platform” in a meaningful way.

Link videos of hackers that you have recorded and/or reported on MunchyMC:

) I don’t have much evidence to show because my “main” servers are both survival and prison. I can show you guys plenty of screenshots though which mainly come from people death spamming/spamming in chat. I reported those usually to staff via Teamspeak (linking screenshot via gyazo). 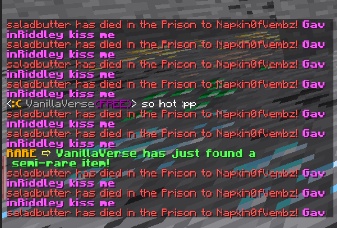 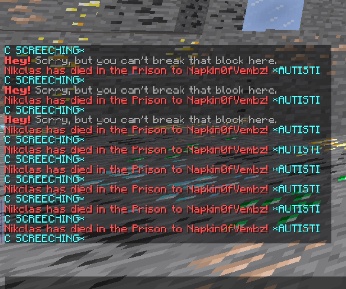 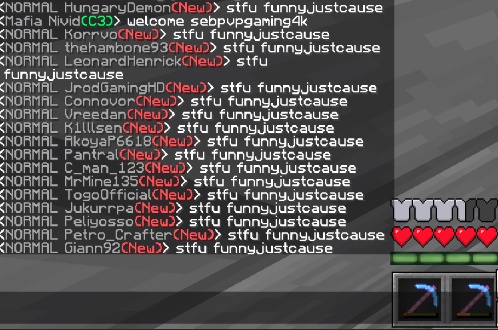 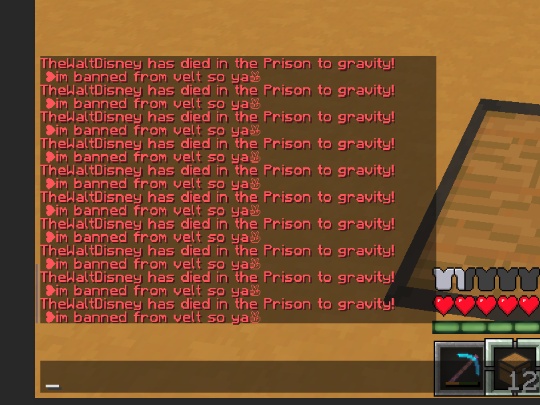 Edit: Was finally able to record some Hackers on Kit 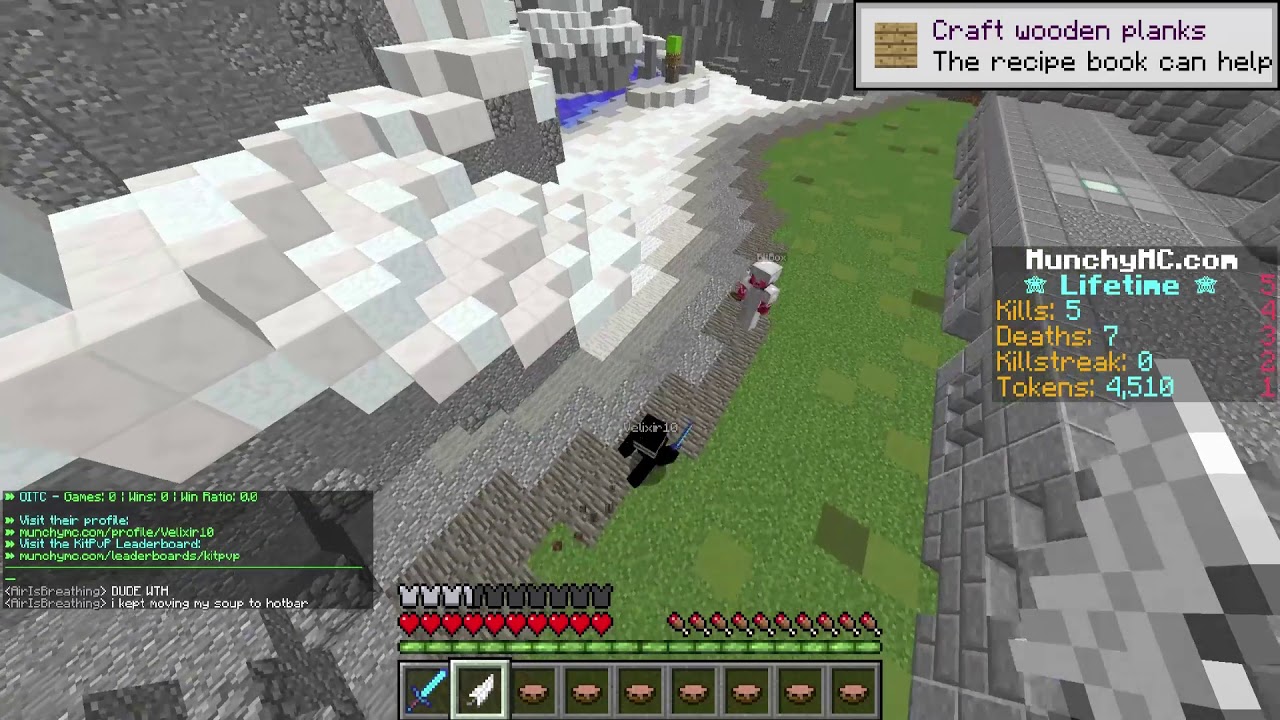 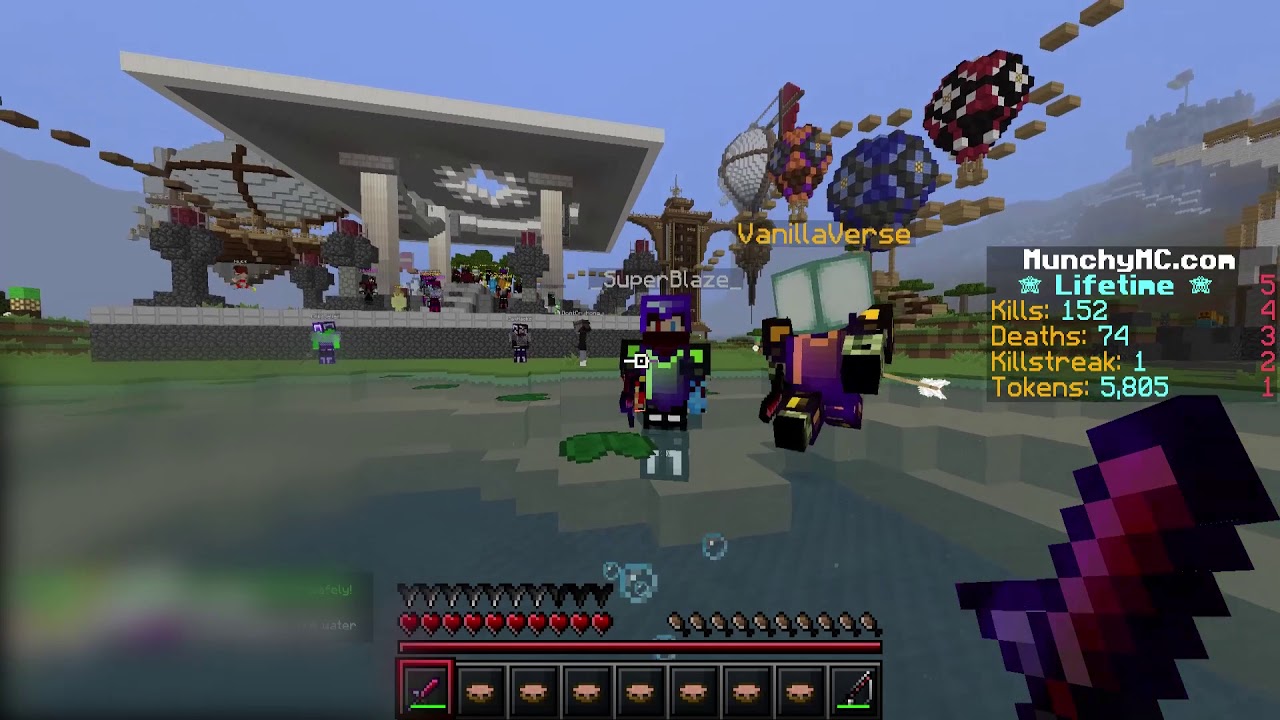 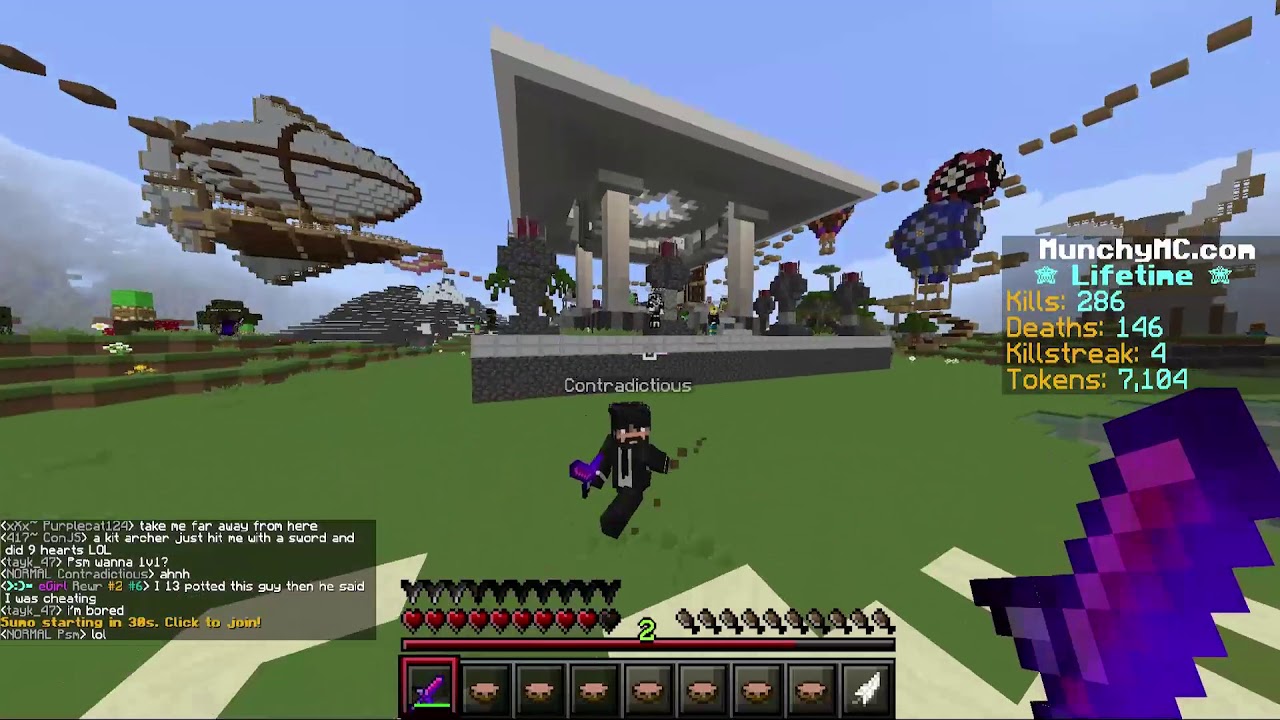 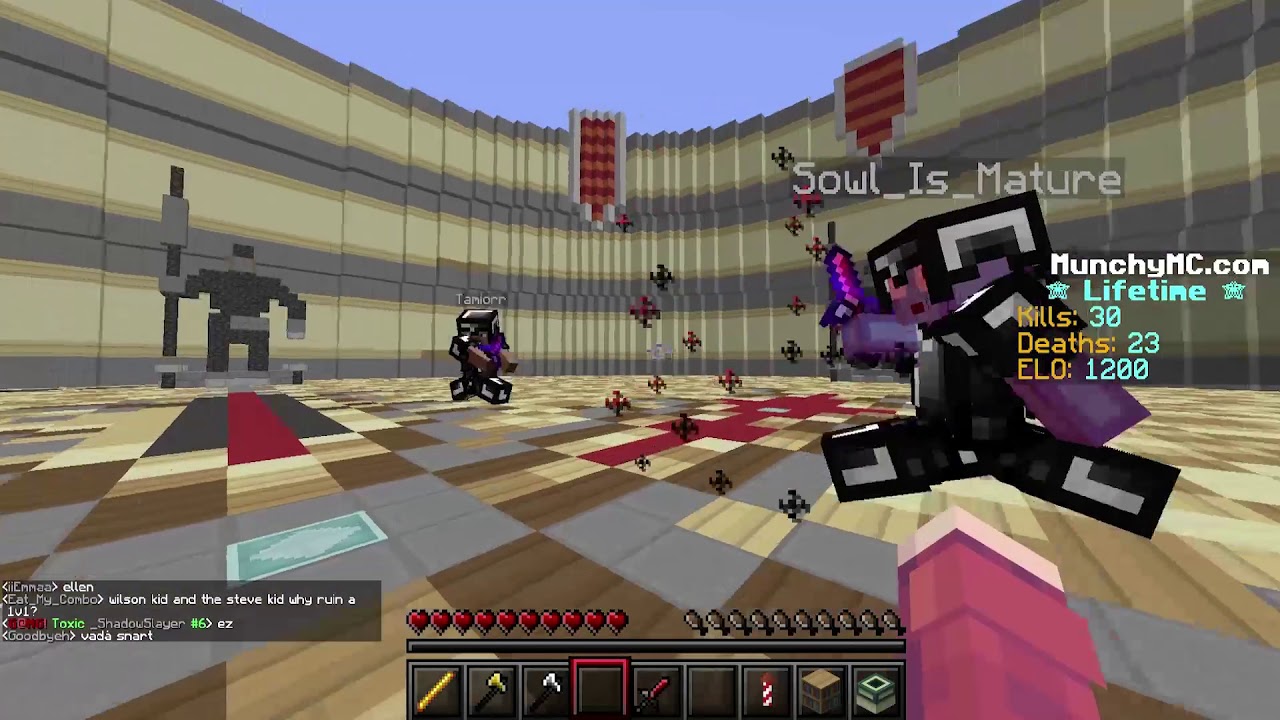 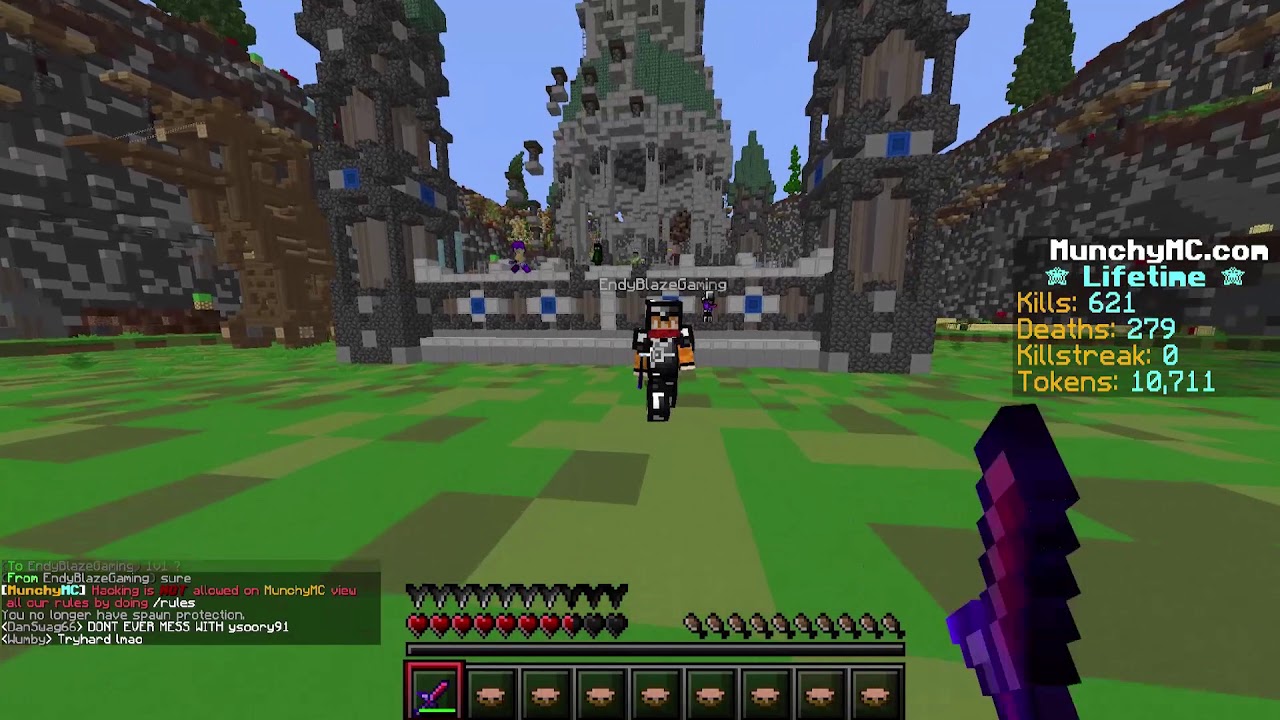 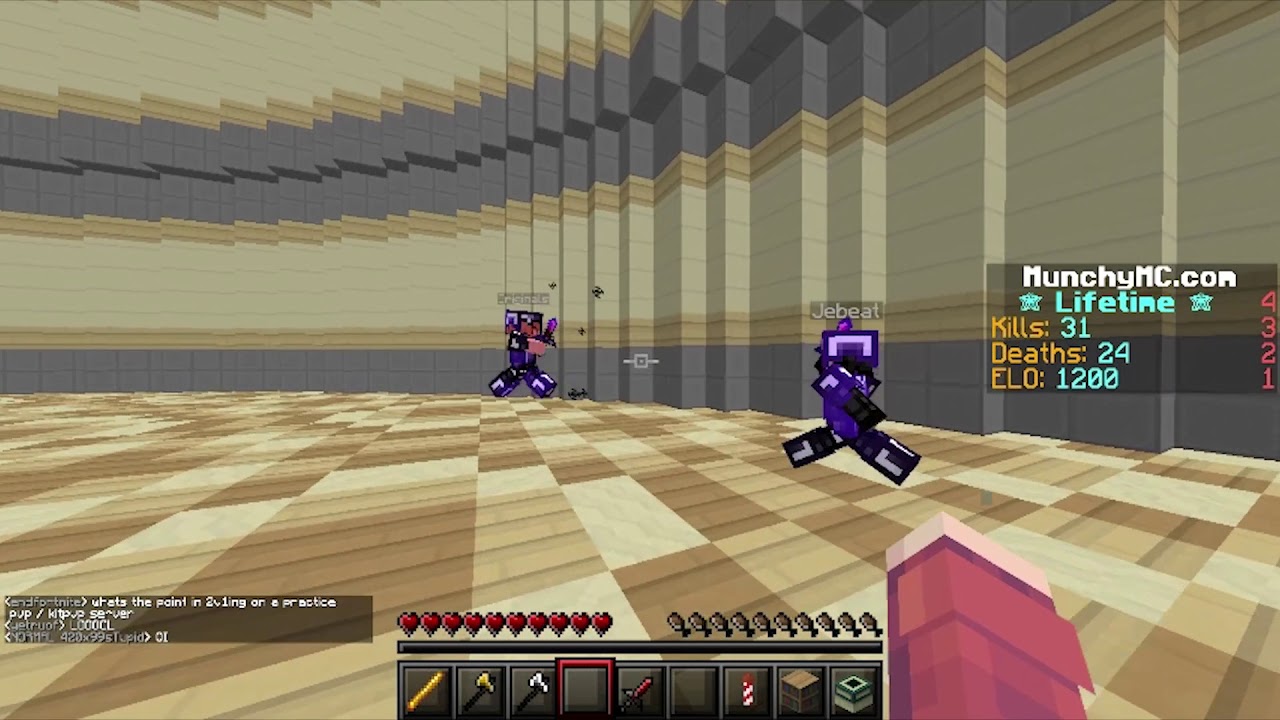 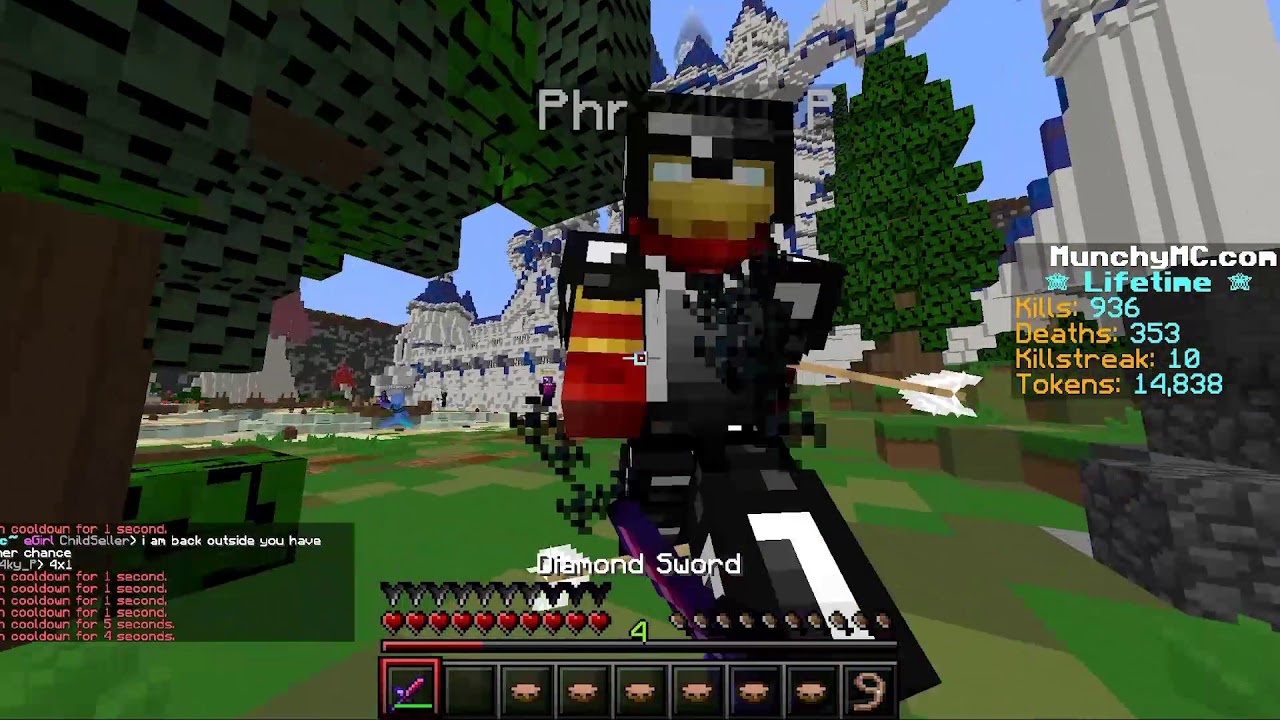 German (tongue language)
English (2nd language, not that fluent with speaking it because I rarely practice it)

I mainly contribute to Munchy by creating Forum Posts. In these posts, I mainly focus on pinpointing stuff which could be improved to create an overall better experience for the whole player base. My main posts include stuff like suggestions or mining guides for prison maps. I created the following posts:

Other than that I enjoy to help out new people who don’t know the basics or commands of the server.

In the last 2 weeks, I was able to make some progress in my contributions as a MunchyMC member.
I joined both the “Prison Dream Chat” and CatTech’s new group. I’m active in both of the groups and try to work towards creating a better server experience for the player base.

Furthermore, I got promoted to Helper which enabled me to get the first glimpse into the world of working as a staff member on this very server. I already was able to help out the staff team by reporting or recording a couple of hackers, muted some rulebreakers in chat and helped out people who needed my help as best as I could.

What is your greatest strength?

Not sure if you can call it a strength but I’m very good at pinpointing stuff. I hate to beat around the bush because that usually wastes a lot of time and resources which could be used to solve the problem sooner and more efficient.
Another character trait of mine is that I’m strictly against lying and denying. I personally believe that you will never get any advantage (a temporary at best

) by just pretending or deceiving people. In the end, it will always get discovered in some way or form which will leave both sides annoyed and angry. That of course not my goal and not the reason I write this application. I want to help out people and don’t live a lie on this server which gets discovered months later. That said I’m pretty sure I can be an honest representation of the server which will stay mature at any time.
Last but not least, I think I’m pretty good at controlling my toxicity. Whilst I had a break from Minecraft I spend most of my time playing League of Legends which showed me how to control that part of me. I realized that you literally get zero benefits by being toxic because it usually results in pissed of people who don’t want to cooperate with you anymore. The truth is that in most scenarios of life you can’t achieve your goal by just being a “one man army”. That’s why I believe that there should be a more strict way of looking at toxicity in general.

When I rethink this question I would probably have to say that my activity is one of my major strengths. I’m consistently online even though I have a full-time employment in my company. What also makes me stand out is my ability to actually be active in game rather then standing AFK at spawn. Also, I would consider myself as a person who replies fast which should be a trait that a staff member possesses, in the case some1 is calling out a hacker in-game or asking me for help on discord/teamspeak.

Comment on your ability to work within a team:

When I’m at work I spend most of my time working in a team. My work consists of being a part of an assembly team of hand manufactured sun protection products. So I’m pretty familiar with common teamwork practices like helping each other out or division of labor. I’m perfectly fine with receiving instructions by higher commands and will execute those accordingly. So I would consider myself suitable for working in a team environment even though I’m an introvert.

What is your experience and knowledge of hacks?

I don’t want to include a list of Hacks I found on the internet. I list things that come to mind when I think about hacks. Those hacks are all straight out my head and no internet research was used for that.

That concludes my mod application. Hopefully, it left a good impression

I as always enjoy constructive criticism and will hopefully fix the mentioned problems.

Have a good day!
~Kawaii

Edit v1: Added KitPvP to the list of servers I want to moderate. I know that I’m rather new to KitPvP but it’s rather pointless to moderate Prison at the moment because the player count hit an all-time low. Of course, I will moderate prison as well but will also dedicate some moderating power to KitPvP because the majority of the player base is currently playing there.

Edit v4: Added some detail to the contribution question and the biggest strength question. Added 2 more videos. Changed up some wording for KitPvP explanation.

I honestly think that, out of all the applications made today, you have the highest chance of winning.
I wish you the best of luck, you deserve Mod honestly!

@AriesGrill
Thanks for the positive feedback. Appreciated! I hope I can be a “Winner” soon

Thanks for the feedback. Wanted to keep the list according to my knowledge … even if that’s small.
Will try to work towards being better informed when it’s comes to hacks.

Little bit more for hacks but +1 best of luck <3

Thank you. Will work on that!

Will work on mentioned factors. Thanks for the honest feedback!

Thanks Ricky. Glad to hear that i leave a positive impact on people.

Didn’t notice that you are on a lot of those.

Hey Kawaiigrill, I didn’t want to respond till I knew what kind of person you were but now I know :).
Here are my thoughts:
Great friend!
Very mature
Great helper
Active
Detailed app
+1
Good luck Buddy!
—Kitty

Absolutely recommend for staff; has proven dedication to the server and is easy to talk with/possesses a suitable personality. Fits all criteria in my opinion, and has made remarkable strides to show readiness for staff.

Thanks for the kind words papa CatTech