Hey Munchies! March has been a wonderful month with promotions, updates, and events all coming together. And so we are excited to release this month’s newsletter, so let’s take a look at a recap of the most important events!

- Dawnity has been promoted to Survival Junior Moderator!

- thycosmos has been promoted to Prison Junior Moderator!

- Vurm has been promoted to Forums Moderator!

- Virale has been promoted to Senior Builder!

- Zammyz has joined the Build Team!

- CARCASSES has joined the Build Team!

- paengi has joined the Build Team!

Staff Member of the Month

I would like to remind all of you to submit suggestions as to who should be the next month’s nominee by sending me a dm. I will take all messages into consideration when choosing the next Staff Member of the Month! Take this as an opportunity to point out the people you think are underappreciated or did something remarkable recently. Thank you!

@HiraethRose has been incredibly active all throughout March on the KitPvP server. She has helped many players by dealing professionally even with difficult situations and keeping the chat well-moderated. 5 Senior Mods and 2 Admins have recommended her for this title, which is a testament to how much she deserves the recognition. Congratulations!

A list of all the past Staff Members of the Month can be found here.

KitPvP has continued its Season V event, as well as the majority of Clans Season IV. While few updates have come out during this time, we’ve begun progress on the next update coming your way, though you’ll have to wait to find out more :)

This month saw the introduction of many ultra legendaries, including the Groot and Doctor Strange Set and RPPR’s Lucky Toe! Furthermore, two new legendaries and a new ultra have been added to the outside world for your looting pleasure! Finally, looting just got a little bit easier because rares are now more common in lower looting zones.
Sick of spawn dying in prisonbreak? You’ll be happy to hear that prisonbreak now has a small PVP grace period so you have the chance to get looted up before dying!

As per usual, there have also been many adjustments and item nerfs and buffs. To view all the changes, simply type /changelog in game!

Hello everyone!
Exciting news came up this month, so get ready!

It’s finally coming!
After months and months of preparation, the survival reset is right around the corner! We can’t wait to see all of you enjoy all the new stuff that has been prepared for you! Until then, here are the survival reset teasers that came out so far:
Teaser n°1
Teaser n°2

Nothing to report this month, we are focusing 100% of our dev power on the reset, but don’t worry, it’ll be worth it!

The winners of the Map Art competition were @ToastyGhostys & @SprinkleDonuts28 , with their amazing map titled “Shelter” ! They won 1 Month VIP++ rank, exclusive colored glow effect (of your choice) and 15 WINTER Crate keys, congratulation to them!

b. [CURRENT] Best Base Build Competition - Judged by BBH!

To celebrate the end of the current survival map, an epic base competition that will be judged by Badboyhalo, has been started! No theme in particular, but make sure to read the rules closely if you want to participate!
The rewards are:

Rewards will be given at the start of the new map, don’t worry!

IV. Survival quote of the month

This month quote of the month goes tooooo… @infernalfae

Make sure to send me your best quotes in discord dms, they might appear in future newsletters!

That’s it for this month folks! Have fun :D

Ayo fellas nah waddup it’s your boy McDonalds with the scoop comin from the Gamemode that actually matters, WoolWars!

If you’d like to stay up to date with every new map monday release, make sure to check out this thread!

Hello guys! [image] Today I have an exciting announcement! Starting today, every Monday there will be a new map added to WoolWars. These will be a mix of Build team maps and community maps, so if you like to make WW maps then perhaps you might see your map in-game soon! Week 1: Kiwi Monster by Aiadeva [2021-01-18_20.08.25] With hints of Sarlacc inspiration, what would happen if a tasty fruit decided it had had enough with humanity? Well, apparently nothing good. My only advice would be…

After a long month and a half of the WoolWars Easter Map Building Competition hosted by the one and only egg, @TheBoop , the mysterious @BFI01 and the smol Kiwi @Aiadeva , we have got some winners for you!

I would like to congratulate @GiantRooks , @joekoe and @beanep for winning this competition with the map Bunny Day! 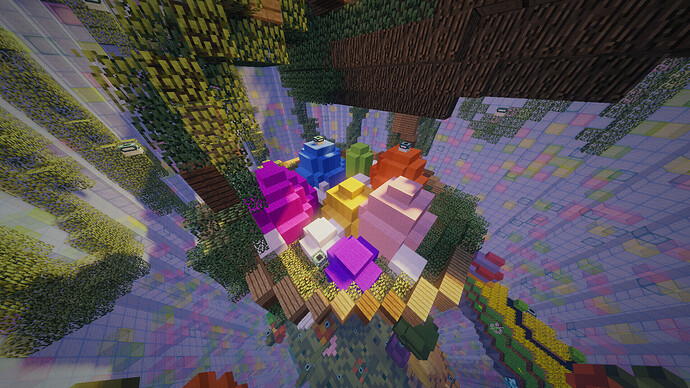 Quote of the Month!

And to finish off this month well…

Here’s a painting I drew of a giraffe

Early this week, @paengi, @Zammyz & @CARCASSES have joined our team as official Builders! They managed to pass their trial in a few days, which is incredibly fast. We are pretty sure their advanced skills at building will help Munchy look better, bringing us wonderful maps!

The results are in! You can check them out by clicking here. Once again, special thanks to everyone who submitted an entry for the competition, and stay excited for future contests.

And that is all for this month’s Build Team Section. Thanks for reading!

And once again, thank you all for reading this month’s newsletter. Stay excited for big updates and many more things. See you all next month!

Congrats to everyone who joined the bug & idea team!

I thought aia made that giraffe @McDonalds wtf

That giraffe is just the most beautiful thing I’ve ever seen.

- Vurm has been promoted to Forums Moderator!

Incredible Newsletter Aia!
I love when these come out! They are so exciting to read great job!
I also agree that cheater is fat

nah mine was less… fat

Now even giraffes are being bodyshamed…

cool newsletter but there are too many words

(Thank you but it’s a group work from all the Newsletter team, I’m only taking care of the survival section :3 )

Amazing newsletter like normal :D 'Grats to everyone who joined the Bug Team!

Yay there’s no math this time

Literally was just thinking about this like 10 minutes ago

congrats to the new people on the bug and idea team, and of course all the new builders & staff !