Welcome back to the monthly edition of MunchyMC’s Newsletter! This month has been quite eventful for sure- in-game and out of the game. We have much to share with all of you, so without further ado, let’s head right into it!

- DarkKnights22 has been promoted to Junior Developer!

- Twinkiewinkie has been promoted to Survival Games Helper!

- spookywilloww has been promoted to Survival Helper!

- KiwifishAuKiwi has been promoted to Survival Helper!

- finessedkid is now on the Event Panel!

- zaniki has joined the Event Team!

- SierSmellyKiwi has joined the Event Team!

- Bananaskin_PVP has joined the Event Team!

- iiRaidz has joined the Event Team!

- SierSmellyKiwi has become a Senior Builder!

- Quorafied has joined the Build Team!

- Gre3nThunder has joined the Idea Team!

With the much anticipated KitPvP 3.0 update under production for the past few weeks, and progress coming along nicely, we hope that within the next couple months a new refresh to Munchy's most popular gamemode will be launching.

While there’s not much information we can give at this moment, we hope that in a few months time, joining KitPvP will be a different, refined experience :)

Season 1 of our Survival Games server has concluded! Next month will announce the winners along with any new information to come along! While this season had lower than optimal activity, we hope that some optimizations in the near future will allow for the stability of the gamemode to support larger playerbases.

This month prison saw the reintroduction of fabled rares! You can craft them by putting 4 of the same legendaries in a crafting bench with a fabled shard. For those that are above prestige 10, ranking up will now reward you with a fabled crate (which rolls you one of the new fabled rares)!

The drug farmers in the prison are in luck, as there is now a new crop to start harvesting! Magical Cactus will drop emerald blocks upon harvesting, making it easier than ever to stack up on cash with drug farms! Loot chests can now also be found in the melon mine, and a new smaller melon mine has been added to the prison. Farm cells are hard to come by, so new cells have also been added!

There is now a /warp parkour to satisfy all your parkour needs! If you manage to complete it successfully, you will also be able to stack up on some free cash from the magical cactus farm at the end of the parkour!

Finally, this map also saw the introduction of a new criminal crate special rare, a new ultra, and the Bellatrix ultra legendary set is fully craftable!

You can view the full list of updates and item balancing by typing /changelog in game.

Here are the current leaderboard positions! Remember that there will be prizes for the highest ranking players!

1.16 is here!
The survival server update earlier this month to include all of the brand new 1.16 content! We tweaked the spawn rates of a few blocks and loot items to make sure our gold-based economy doesn’t get negatively affected by the change, but all the exciting additions can be found in the nether world and the brand new…

In response to a lot of community suggestion and feedback, we added a whole new world to the server! The Underworld is a permanent, non-resetting nether world (seperate to our regular resetting nether) for all of your building, base making and farming desires. It’s a 30k x 30k world that you can make claims inside, and /rtp about to explore and find the perfect spot for you!

More information can be found here

Congratulations to our fantastic winners of the Good vs Evil Build Competition! The creativity of these builds was truly amazing!
These amazing entries can be seen here. You can also view all the builds in person on the survival server!

This month for woolwars, not many things have happened, but the things that are happening… they are big.

Early this month I announced the winners for the map building competition, he’s a sneak peak at some of the maps built! Congratulations to baqquette, Alkemystix and DaanB100 for having their amazing builds selected to be soon added to the duels map rotations.

As many of you have likely already seen we will be hosting a tournament on woolwars on Friday August 7th at 4:30 pm EST, this tournament will consist of 5 games of up to 125 players, with the top players of each game moving on and playing in a winners game to see who is the best!

More information on this tournament can be found here. 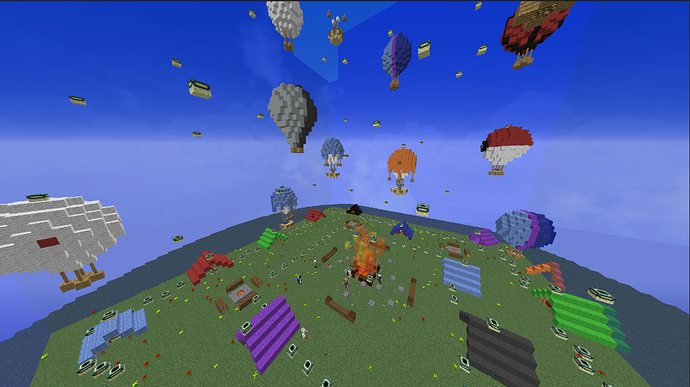 We know a lot of players have been having issues on woolwars recently, with the shops down for testing and the daily lag we are experiencing, it doesn’t bode for the best gameplay. I do apologise on behalf of all the staff team for this. But our developers have been very hard at work in trying to fix these issues at the root cause instead of just putting a bandaid on the wound and hoping it fixes itself. So be sure to show tonnes of appreciation for both Fumaz and Callahan for all the effort they have been putting into the gamemode, making sure it gets the love and attention it needs.

Marni is a new Junior Developer that has joined Munchy only recently, I thought it would be cool for everyone to get to know a bit about them so I conducted an interview with them to find out a bit more.

From everyone on the staff team and the community: Welcome Marni

Thank you for reading! I hope this newsletter has found all of you well, and as per usual, we here on the Newsletter Team all wish you a happy August!

Great! Congratulations to everyone!

Wonderful newsletter!! Congratulations to everyone!!

Congrats on all the promos

Congrats to all the promotions :)))

Congrats everyone on the promos!

Was wondering where my newsletter is >:c
Really great job on this one dudes, we had a great month and I can’t wait to see what August brings with it <3

A pretty good Newsletter =)
Congrats to everyone on their promotions!

Congrats to all the new helpers ane event members (:

Put prison kills there cause I want to be in this