Hey Munchies!
This month has been relatively calm when it comes to big changes, but a lot of tiny things have been happening everywhere so there were some exciting changes for all of you! Let’s take a look at a recap together! 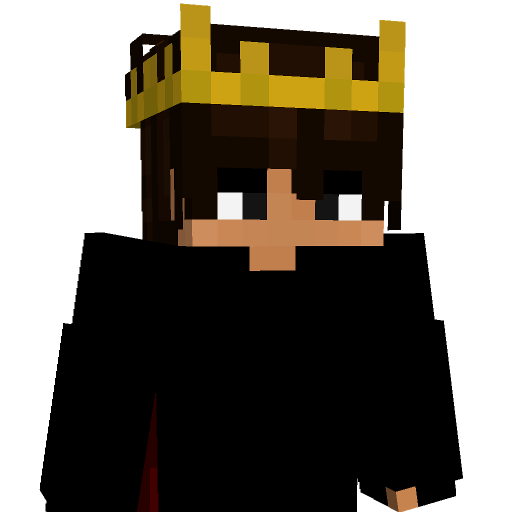 Mikeal512×512
Mikeal has been promoted to KitPvP, Survival Games, WoolWars and Survival Admin!
His continuous efforts on Munchy have culminated in a huge KitPvP update and the rebirth of Survival Games. Moving forward he will continue as the SG, Kit and Build Team manager and with his new Admin powers he will have no trouble growing and developing Munchy into the future!

- Gould_ has been promoted to Prison Senior Moderator!

- Omarmu has been promoted to Survival Games Senior Moderator!

- whippingqueen has been promoted to Prison Moderator!

- kamiwami has been promoted to Prison Moderator!

- Devonymous has been promoted to Survival Moderator!

- Kalex31 has been promoted to Prison Junior Moderator!

Staff Member of the Month

I would like to remind all of you to submit suggestions as to who should be the next month’s nominee by sending me a dm. I will take all messages into consideration when choosing the next Staff Member of the Month! Take this as an opportunity to point out the people you think are underappreciated or did something remarkable recently. Thank you!

To anyone involved with Munchy recently, our second pick for the Staff Member of the Month should come as no surprise. @DarkKnights22 has had a phenomenal start into 2021. He’s made improvements and pushed updates to virtually every individual server, as well as global changes both inside and outside of the game. He has quickly established himself as one of our best and most important developers and the amount he has been able to accomplish in just under 2 months is really astonishing. Keep it up, Dark!

A list of all the past Staff Members of the Month can be found here.

As a MunchyMC player, there are many things and items you may want to possess. But not all of us have the skill or time to pvp and grind ourselves to that stuff. And not all of you will be able or willing to spend a lot of money on the store. Therefore, we are hosting a math quiz this month and the winner will take home a buycraft reward worth roughly $50. Now before I scare you guys off with the math, let’s first get excited about the rewards!

The first person to reply with the correct answer and a sufficient explanation or calculation will receive one of the following prizes:

If no one manages to find the solution, I may update the post with a hint or two.

February was a big month for KitPvP! Season V was released, as well as new kits, a new map, and a clans season starting! For more information on each, I’ve hyperlinked below.

There have been sightings of a new villain around the prison, and his smile is not very pretty… You can now suit yourself up as the Joker with the new Joker set! Furthermore, there is now also a new mythical… Will you be lucky enough to find it? There are also two new ultra legendary upgrades; the Magneto Pickaxe and the Green Goblin Pickaxe!

The beloved prisonbreak is finally back! We have a whole new map called ‘Helicarrier’, a new deathmatch arena, and players can finally experiment with a whole bunch of items that they can’t quite properly get their hands on in the prison! The winner of prisonbreak will also receive 4 prisonbreak crates, which can give you a multitude of valuable prizes such as an ultra boost, mining boost, 5x donator crates, 5x epic tickets, 1x ultra legendary crate, mega event pass, event party pass and much more! So… when is it? Prisonbreak will occur on a daily schedule at 8am, 2pm and 8pm EST every single day! There will also be a quick prisonbreak at 5pm EST every day.

This month prison also got some new crates, and they’re called Swamp Crates! Dabble with your luck and try to pull some of the new special rares that are exclusive to swamp crates such as Shrek Ears, Crocodile Tail or Frog Feet!

As per usual, there were many item buffs and nerfs. You can view the full list of updates and item balancing by typing /changelog in game. 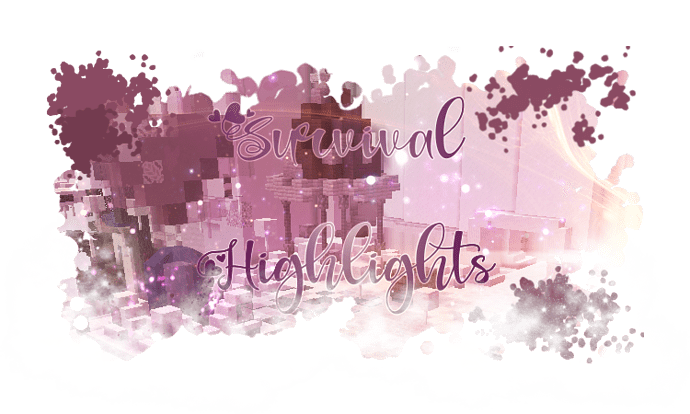 This month, Survival was filled with love! How’s so? Well let me tell you all about it!

It is a well known, not subjective at all fact that survival is the best gamemode ever, so for all players the staff prepared a special surprise this month!

First of all, the spawn has been redecorated, only for this month, to suit the theme of February, Valentine’s day! 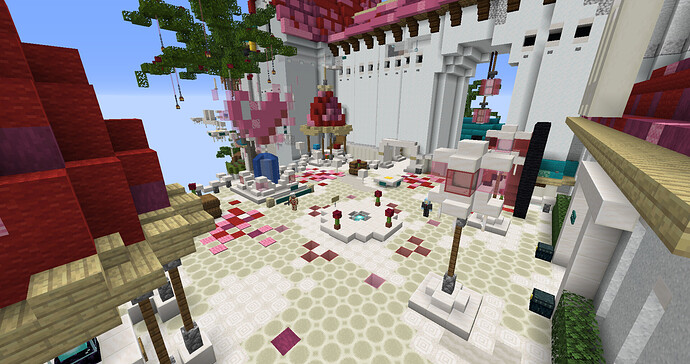 This special spawn update also brought us Cupid ! Paying her a visit with an empty slot in your inventory would grant you a rose, rose that you could then share with someone special! 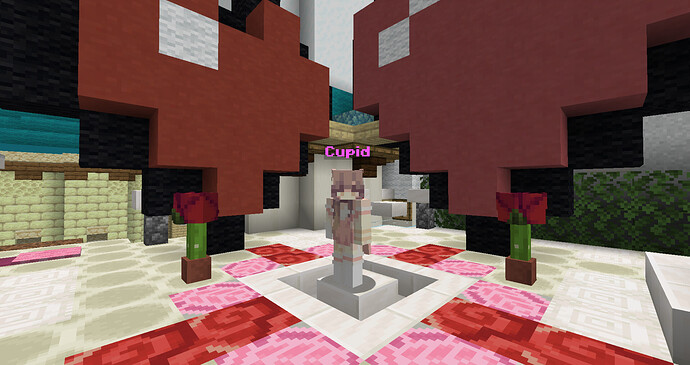 You don’t have a valentine? It’s fine, this rose is a rose of friendship, so don’t be afraid to give it to someone you love, even as a friend!

Cupid and the spawn decorations were available only from the 14th to the 21th of February, but the roses are permanent!

Best of all, they can be used as a decoration block if you place them of the ground, and the description to not disappear when you mine them back! 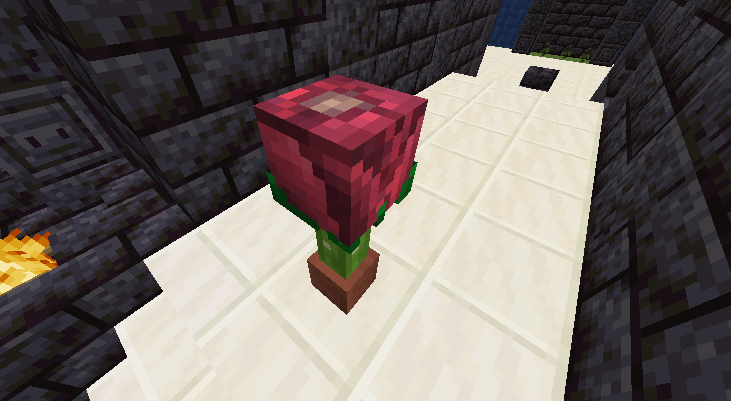 We hope you all enjoyed this Valentine’s event!

This month also brought us an exciting update. A new command, available to everyone, that allows you to show off one of your item. Very useful if you want to discuss prices with someone, show a book before putting it in the auction, or just flexing your maxed items! 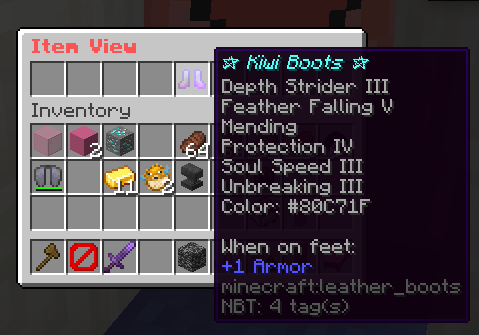 We all hope you like it, just keep in mind that there is two cooldowns associated with this command, one global cooldown of 1mn and a personal cooldown of 5mn!

All the participants did an amazing job, but our big winners are QUEENRIM/Aetherim and igotchu!

The MapArt competition closed the 28th of February! The entries were all amazing, thank you everyone for participating. The results will be out in a few days!

IV. Survival quote of the month

Sometimes, the survival chat gets filled with funny quotes and gets overlooked… But not to everyone

So the survival quote of the month award goes to… @MiuThePufferfish

This is it for survival folks, thank you for yet another amazing month in survival and I’ll see you all in game!

Welcome back to the part of the Newsletter that matters… WoolWars!

Who’d you kiss this valentine?! Apparently, @joekoe decided to kiss me.
Anyways…

This update has brought in some very exciting short-term updates that helped us celebrate this year’s Valentine’s day!

With a beautiful map made by @whippingqueen

And of course, the /kiss feature mwah

And Finally, a very… interesting compigtition!

During the few days when we celebrated Valentines, following a piggy attack on the WoolWars lobby, @BFI01 has decided to bring quite an interesting competition: Pig Naming!
Everyone for a week has gathered together to find the perfect name for our soon-to-be lobby pig, who we would love and appreciate.

there is a wonderful opportunity for the community to show off their creativity and building skills with our Easter Map Competition! Participants can look forward to winning a month of Legend as well as the WOOLY tag for each team member! More information and rules can be found here.

Thanks to our builders and community members, we have many new maps to showcase this month!

Thanks again for all the wonderful builds!

Thanks to @EeveeNoises for hosting a neat little brackets tournament on stream! Congrats to Fluffyuncorn2013 for taking first, and Qu1ff and ImBoris for taking 2nd and 3rd!

Be sure to join the WoolWars Events Discord for information on future tournaments and competitions!

Watch out for mobs living in the lobby, including rabbits, villagers, and pigs, and a new Parkour!

Written by McDonalds and Mixer.

@ZammyDontFall has started their trial after accepting their application (30 minutes after applying!)
We hope to see a good progress on their trial and we wish them the best of luck on it!

-~ New Maps! ~-
As promised in the last newsletter, here’s a Sneak Peek of a future map! Can you guess what it is yet? 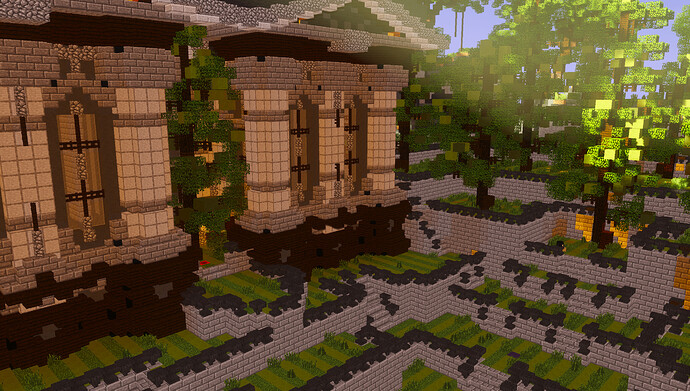 The newsletter team would like to thank all of you for tuning in again this month.
Get ready for some even bigger changes in the coming months and stay safe! See you next month!

Good luck to anyone going for the prize!

Wonderful newsletter once again! Thanks for this!

This newsletter in particular is one of my favorites

It definitely has nothing to do with me being on it

As an answer for the quiz, although it has probably been done already, im pretty sure that the remaining people’s chances are 25% each.

Those are some incredible Maps and Builds! Incredible newsletter like always! Best of luck to everyone who participates in all the contests and congrats to all the promotions! <3

Thank you for the news and good luck to anyone who is going for the prize.

Apparently, @Joekoe decided to kiss me.

I’d do it again xoxo

Good luck everyone participating in the math competition, and thanks for writing another amazing newsletter!

excellent newsletter. please include a PSA on how to stop relying on me when for memes next month

This newsletter in particular is one of my favorites

You don’t have a valentine? It’s fine, this rose is a rose of friendship, so don’t be afraid to give it to someone you love, even as a friend!

While the other 5 were eliminated, BFI clearly told mcdonalds that they would not tell McDonalds about THEIR chances- so their chance stays independent at 11% (1/9) while eliminating the 5 others leaves the remaining as 3 out if 4 people remaining.