Hello Munchies! Today I am going to educate you on the topic of one of Munchy's latest servers, Purgatory!

This guide will cover the following:

Getting to know about Purgatory begs the question:

Purgatory is currently one of MunchyMC’s latest gamemodes! On Purgatory, the world is represented as a fiery hell where all the hackers of MunchyMC must go to redeem their sin of hacking on the server.

This strange place is killed with the worst of the worst. You use your abilities to play with the minds of those who are not at virtuous as you.

On purgatory there are quests you must complete to be able to be unbanned. If you are a banned player, the players that are not banned are able to mess with your mind to try to make your mission of becoming unbanned a living hell. Not only can they just mess with your mind, they can make your death most undesirable. 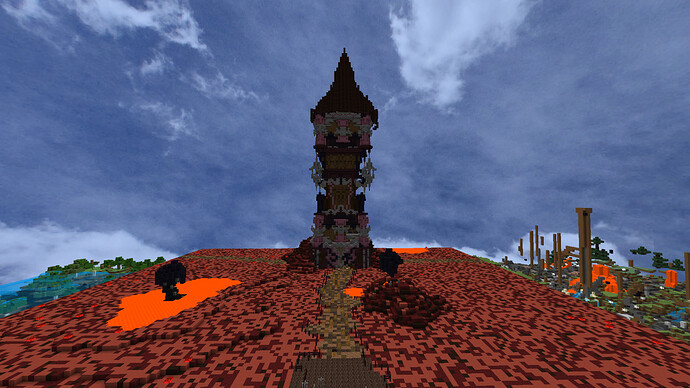 This is the fiery hell that a banned player must wake up to in order to replenish their dirty sin. Everything is full of lava, magma, fire, soulsand, and everything you despise.

How does purgatory work?

Purgatory, as I have stated above, is a place where all the banned go to try to get a free unban. What I will talk about next is the “Trollers”.

These people are here to troll you and make it harder for you to become unbanned.

Here we can see the list of all the trolls.

There are quite a few trolls as you can see here.

Here is a list description of what each troll does.

Creeper: When used, plays the sound effects of a creeper about to blow up behind the player

Smokescreen: Spawns an orb of grayish particles around the cheater

Flip: Flips the cheater around 180 degrees

Web: Spawns a web on whatever block the cheater’s on

Lag Stick Over the course of 3 seconds, the stick will teleport the cheater to their original spot to make them “lag”.

Burn: Lights the block the cheater is standing on on fire for 1 second

Storm: Launches the cheater in a random direction

Bouncy Knocks the cheater 25 blocks up in the air

Pumpkin Puts a pumpkin over the cheater’s head

!! Scrambler !! Scrambles the cheater’s inventory every .5 seconds for 5 seconds.

TNT Spawns tnt on the cheater with a 6 second fuse

Free Shovels! Fills every empty slot with a wooden shovel

Faked Spawns a fake drop that explodes upon pickup

These are the trolls are are used to help make your life easier, and the hacker’s life terrible.

How the new Adventure mode works

As I’ve said before, being a hacker means you can be trolled and messed with. But… what if you wanted to not hack on the server but experience the trolls for yourself?

By simply typing in “/adventure” you yourself can experience all the pain and suffering our dear hackers are experiencing! It’s quite a fun feature to try out if you want to have a reason to not hack on the server

What Does The T,A, and B in the tab mean?

To finish off our guide, In case you haven’t seen it already, there are letters in the tab when you press it. You may see a T, a B, or even an A. What these mean is what we covered before!

A-Adventure - Which allows a Troll to play as well. However they do not need to complete all the quests, as they are not banned.Also, they can go back to Troll mode anytime they want.

B-Banned - This player has been banned for breaking our server rules and must complete a few quests before being unbanned as they try to they will be trolled by Trolls and maybe killed by other Trolls in Adventure.

That just about finishes our guide! Tell me in DM’s if I missed anything or you would like me to add :D